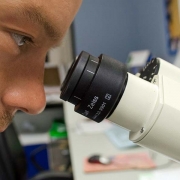 100 million years old has the oldest known sperm so far. It is a remains of sperm found in a female of a small crustacean from the Cretaceous era. A small being that was enclosed in a drop of amber. A form of conservation that has allowed it to reach our days. Thus facilitating the investigation of animal reproduction in extinct species.

This is, at least, what has been published in the prestigious journal Proceedings of Royal Society B. An article that we knew in Spain thanks to the dissemination work carried out by the 20 minutes newspaper in this area.

At Proiser we consider that it is important for the general population to know how many advances are made in the field of reproduction. Even when these findings are not directly related to the generation of new human beings. Therefore, we bring here today a summary of these new contributions that have been developed in the study of animal sperm.

The crustacean specimen in which the 100-million-year-old sperm sample has been found belongs to a hitherto unknown species. A species baptized with the name of Myanmarcypris hui. And that, apparently, belongs to the class of ostracods.

The location of this rest of sperm was fortuitous. And, among the remains of the crustacean fossilized in amber, the researchers located a female. Later, they discovered that inside her reproductive tract there were giant sperm cells. Which, by dating it, made the sample the oldest fossil in which sperm cells have been conclusively identified.

As explained by the spokesmen of the German Ludwig-Maximilians University, one of the signatories of the study, ostracods existed for 500 million years.

Your study in very important. For it has allowed thousands of modern species to be described. And it is that finding fossilized shells of these crustaceans is not something rare in areas like Myanmar, where these investigations have been carried out.

However, the main novelty on this occasion is that the remains found preserved their reproductive organs. And with them the sperm they contained. Which was an important find. And is that with it

For its study, it was necessary to have the latest technology. In order to access this information, it was necessary to reconstruct computer-assisted images with 3D X-rays. In this way, it was possible to know how much amber contained inside. These images revealed details of the anatomy of these animals that were previously unknown. For example, the shape of their tiny limbs or what their reproductive organs were like.

Luck was also on the part of the researchers. And is that one of the specimens was female. And this one conserved inside sperm of a reproductive act previous to be fossilized. Hence, it can be said that 100 million years has the oldest known sperm. For this reason, this sample has become the oldest of all those that are preserved to date.

At Proiser we know how important it is to know all possible details about the fertilization of species that have already become extinct. Well, they allow us to recover them when deemed appropriate.